Polar travel has recently come into the spotlight, specifically in regards to the perilous environmental situation in both the Arctic and Antarctica and the role tourism may play, either to its benefit or detriment. As many rightfully ask: is it even possible to travel responsibly to the two most fragile and important regions of our planet? From the rapid melting of Antarctica’s glaciers to the precarious state of the Arctic’s endemic wildlife, it’s totally fair to question the feasibility of taking tourists to our polar regions.

When trying to determine an answer to this possible conundrum, several factors need to be considered. Luckily, we’re not the only ones who are scrutinizing the situation: scientists have been researching this very topic for years and their arguments are not only sound but also logical.

Firstly, however, it’s important to understand that Antarctica and the Arctic are two very distinct regions. They make look similar to you and I (lots of ice, freezing winds, crazy hardy wildlife) yet every other aspect about the two regions could not make them any more different. As such, the environmental challenges they face are unique and the solutions, consequently, will probably be distinct as well.

Antarctica – A continent surrounded by sea 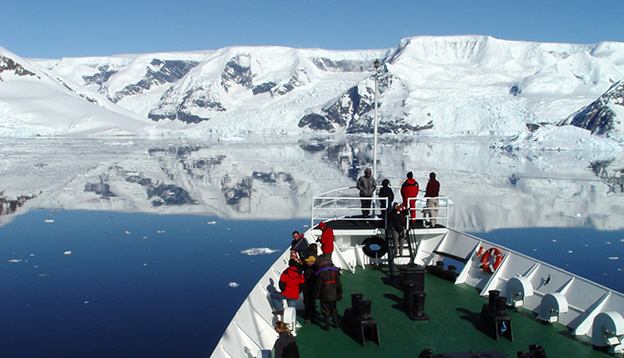 A bonafide continent, Antarctica is a landmass that’s almost completely covered in ice. It isn’t owned by anyone, doesn’t boast an indigenous human population and there’s no single country that has the responsibility to protect it. Instead, Antarctica is protected by a conglomerate of nation signees to the Antarctic Treaty, which prohibits anything other than scientific research and tourism from taking place. So far, so good. And in case you’re wondering: yes, it is good work being carried out in the south and all the strict regulations in regards to both research and tourism are being successfully enforced, for the most part. You can read more about the future outlook for the Antarctic Treaty if you’d like to understand how this treaty – crucially missing in the Arctic – has helped Antarctica remain protected.

Even critics of the Antarctic Treaty will attest that the immediate threat to Antarctica is global warming and that although rising temperatures have the potential to be catastrophic down south, the threats are not as dire as those faced by the Arctic.

How can responsible tourism help Antarctica?

When done right, responsible polar tourism has the potential to save Antarctica, a continent that doesn’t have a native population to stick up for its rights. Scientists agree on this: aside from the researchers who spend huge chunks of their time studying on the continent, the only other people who are seriously vocal about Antarctic protection are the tourists who visit. The premise of this concept is quite simple: we protect what we hold dear and we hold dear what we know, have seen and have experienced. We no longer mourn the dinosaurs, woolly mammoths or the dodo birds because there’s no-one left alive who saw them. We speak up about the Great Barrier Reef, we sign petitions for the protection of the Great Australian Bight and we post on social media about the threats to Antarctica – these are places many of us have visited, places we love and places we want our grandchildren to experience. 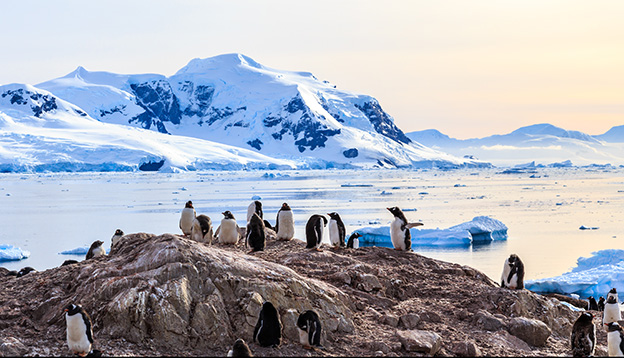 At Chimu, we have seen this love-and-protect effect from first-hand experience. Our guests become increasingly involved and engrossed as their Antarctic expedition progresses, soaking up the educational lectures, the data and the advice, many returning home as fully-fledged ambassadors for the cause. At Chimu, we call them our Antarctica warriors – tourists who return home after an Antarctic expedition with a different outlook on the planet and their own footprint on it. Imagine we could do this with every human on the planet, over many, many years?

One imperative caveat, however, is that for tourism to be responsible it needs to be limited. Slow, small ship cruising is what’s believed to be beneficial to Antarctica yet fast-paced visits with easy access (like the threatened ‘non-stop Antarctica flights recently suggested by both China and Argentina) can spell real disaster. Tourism can be a force for good. Mass tourism hardly ever is. This National Geographic article goes into further details and helps us understand where the real threats lie. 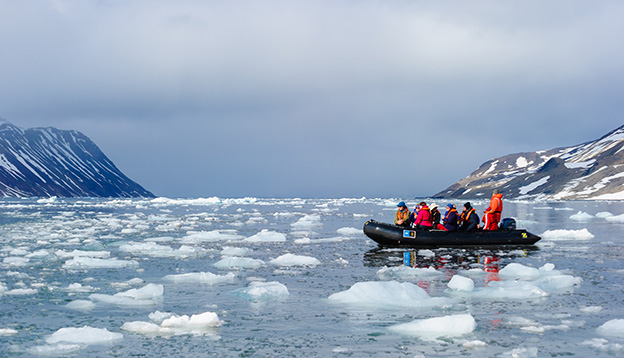 Tourists from the National Geographic Explorer cruise ship explore a fjord in the Arctic via a zodiac. Photo: Shutterstock

The Arctic – A sea surrounded by continents

Unlike Antarctica, the Arctic is a region and not a continent. The big chunk of ice covering the north pole of our planet is exactly that: ice floating on ocean. Everything about the Arctic makes it the most vulnerable of the two poles: it is markedly warmer than Antarctica and the landmass surrounding it is inhabited by over four million people. As far as scientists can tell, humans have been living in the Arctic for over 20,000 years: the human footprint on this Polar Region is infinitely greater than on Antarctica.

All up, the Arctic Region is shared among eight nations, namely Sweden, Norway, Finland, Russia, the US of A, Greenland, Iceland and Canada. Given all this vested interest and human history, it’s unsurprising to learn that human action is an even greater threat to this northern region than rising global temperatures. The Arctic is under a constantly increasing threat of direct exploitation in the form of oil drilling, commercial fishing, hunting and general development. This makes Arctic wildlife particularly vulnerable as well, primarily because there are so many more species of land animals than in Antarctica, where there are none. 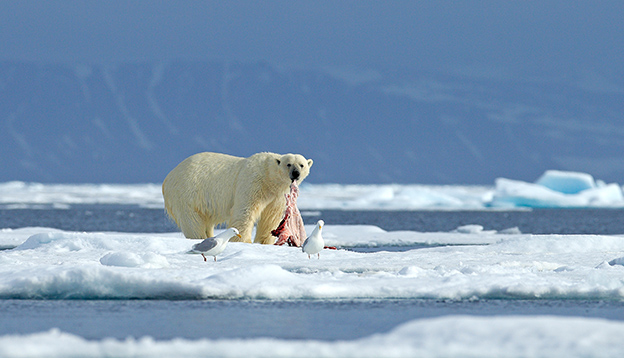 A polar bear on drift ice in the Arctic. Photo: Shutterstock

If Antarctic wildlife numbers diminish due to unnatural deaths, it’s because of something that happens elsewhere on our planet. In the Arctic, however, the wildlife is being threatened directly in its home turf. And we haven’t even touched yet on the topic of the indigenous Arctic cultures that are facing very serious threats, with increasing mineral prospecting threatening their very existence. The growth of mass tourism is the latest problem to add to the mix, primarily from mega cruise liners that allow thousands of gawking tourist to land ashore on small and remote Inuit villages all at once, as recently reported by The Guardian.

How can responsible tourism help the Arctic?

Perhaps the prime point to make here is that large-scale drilling, prospecting and development are of much greater threat to the Arctic than tourism could ever be, yet it’s not just a matter of picking ‘the better of two evils’. As with Antarctica, the aim of responsible tourism operators is to offer in-depth and enlightening visits, the kind that swap nightly cabaret shows with educational lectures. These are the kind of trips that have the potential to change someone’s outlook on the way they live. This is the kind of place that teaches you that what you do at home, every day, has a much greater effect on our planet than what you do on your yearly vacation.

Tourism can also provide an alternative income to indigenous communities who still rely on the trading of fur and game-meat to survive. People in the Arctic have been enjoying a subsistent lifestyle for thousands of years and, nowadays, they’re still allowed to hunt endangered species, although numbers are limited. Nevertheless, offering an income – in the form of tourist dollars – directly on their shores means they’ll be less likely to migrate to larger cities in search of work and can actually help them preserve their traditional way of life.

Nothing in the world is ever black and white and never has this proven to be truer than when discussing the benefits of tourism, even in the most ‘endangered’ destinations of all.

Choose to actually visit the Polar Regions, however, and chances are you will start taking more accountability for your own footprint, in general 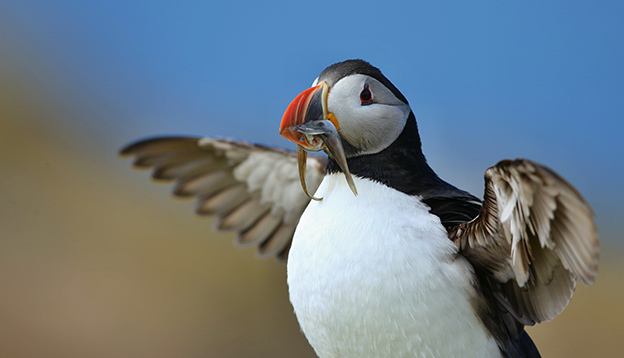 A puffin in the Arctic. Photo: Shutterstock

What will benefit our planet is not only more responsible polar tourism but more responsible living, no matter where we are. Our increasingly consumeristic lives may well manifest in the Polar Regions, but what we see happening in Antarctica and the Arctic is a consequence of everything we do, back home.

So what can one do?

If you do decide to take a Polar trip then following the strict guidelines set out by your tour operator is your prime objective. In the Arctic, that means being respectful of indigenous communities you visit, buying hand-made artefacts as souvenirs and taking locally-guided excursions, to help provide income to local families. In both regions, you ought to ensure your hiking gear is clean to a fault: introduce foreign soil or bacteria here and you’ll be adding to the problem. You’ll need to keep a respectable distance from the wildlife and keep noises to a minimum; stay on predetermined walking routes and don’t veer off on your own.

Ship-wise, you’ll do well to choose the smallest expedition ship you can afford, the lower pax numbers being not only beneficial to landing sites but also to you, as a passenger. The lower the guest count, the more time each person has to spend ashore. More importantly, however, you’ll want to trust a company that’s evidently committed to sustainable and responsible tourism, not one that’s using it to greenwash a party cruise. Polar travel is expensive, time-intensive: chances are you’ll be on a much-coveted adventure you’ve been dreaming for years.

At Chimu Adventures, the commitment to sustainable travel has been at the very forefront of operations since our company’s inception. Having travelled and guided extensively through Latin America before starting our company, we were incredibly aware of not only the benefits of tourism – in just about any destination – but also for the potential of doing inadvertent harm, if we did all the wrong things. After all, there does come a point where we can collectively love a place, a little too much. So forget about behemoth cruise liners taking thousands of guests through the smallest canals of historic European cities: when it comes to responsible polar travels, we believe in small group expeditions that are invaluably educational. If we can turn just one more ‘mere tourist’ into a Polar warrior, then we’ll consider our job done

You can learn more about our most recent Sustainability Initiatives and see the kind of journey we have on offer in the Arctic and Antarctica. And, as always, feel free to contact us to know more.

This journey will offer you the highlights of northern Antarctica: the South Shetland Islands and Antarctic Peninsula